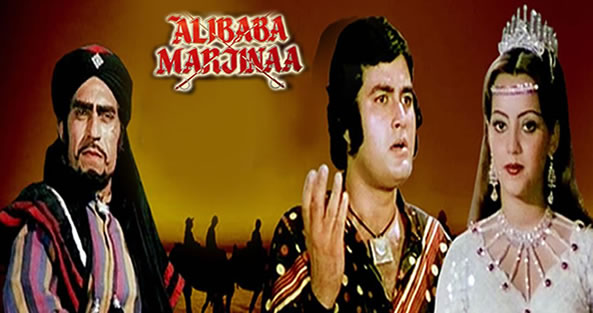 Alibaba Marjinaa is a 1977 Bollywood film directed by Kedar Kapoor. The film stars Prem Krishen as Alibaba and Tamanna as Marjina.

Plot: Circa the Mughal rule in Persia, Alibaba lives a poor life-style with his mother; married brother Qasim and his wife. When a princess named Marjinaa is being sold in the slave market, Alibaba wants to buy her and set her free, but he does not have the money. So he borrows some money from Qasim, buys Marjinaa, who offers to live with him as his slave for the rest of her life. Alibaba would like to end slavery, but is unable to do anything as he does not have money. Then one day his mother goes to Qasim to borrow some scales, and it is later that Qasim finds out that Alibaba has come across considerable wealth - enough to buy all the slaves and set them free. Qasim gets more information from Alibaba, so that he can also get wealthy. Qasim does not know that he has just signed away the rest of his life, and put the lives of his wife, mother and brother also in grave danger.

Film is set in the backdrop of Money, Power & Business. largely based on the Stock market. more...
Home / Movies /Alibaba Marjinaa