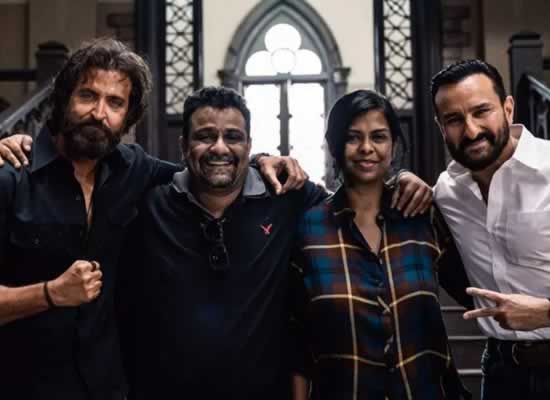 As per media updates, Hrithik Roshan and Saif Ali Khan are uniting for their next Vikram Vedha. The movie is the official Hindi remake of the 2017 thriller of the same name which starred R Madhavan and Vijay Sethupathi. While Hrithik and Saif's look have already made buzz and eagerness among their followers, there is a section that has its doubts about the Hindi remake. For the information, husband-wife filmmaker duo of Pushkar and Gayatri, who directed the original, are also directing the Hindi remake.
In a latest media chat, the director couple disclosed that there has been no pressure from anyone to make the Hindi version of Vikram Vedha in a certain manner. Explaining on the same, Pushkar revealed, "We know how to make films in a certain way, and we will stick to that only. I hope people don’t think of it as ‘Bollywoodised’ or anything. There has been no pressure from any quarters to do it in a certain way, let’s put it that way. There has been no pressure from the producers or distributors saying films here have to be made a certain way. Nobody has had that conversation with us."
In the meantime, Gayatri disclosed that they were brought on board to recreate the elements that made the original so successful. "They liked the film and they wanted us to make it the way we make it. We have not found any pressure from any side and we have done our best," she stated.
The Hrithik and Saif starrer thriller is set to release later this year.