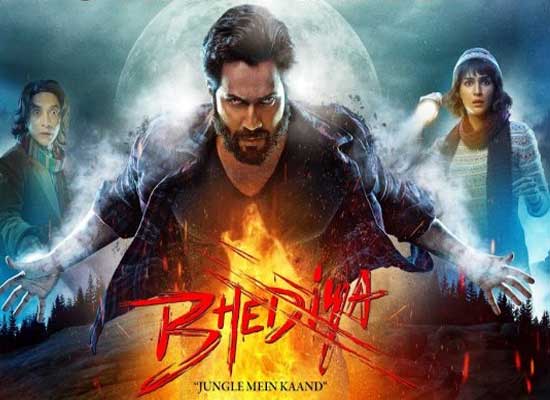 Recently, the trailer for the movie Bhediya, starring Kriti Sanon and Varun Dhawan, was unveiled. After the teaser was released, the movie made headlines. Fans' interest has grown as a result of the exciting scenes. Amar Kaushik is the director of this horror-comedy. Produced by Stree and Roohi producer Dinesh Vijan, it is written by Niren Bhatt. On November 25, the Hindi, Tamil, and Telugu versions of the movie will open in theatres. Varun discussed his preparation for the comic portions in the movie at the trailer launch.
The Badlapur actor revealed, “I would laugh like crazy when shooting for comedy scenes. Abhishek and I are like huge Akshay Kumar fans. So before doing any scene, we would enact that scene like how Akshay sir would. When you speak of comedy, Akshay sir's name is synonymous with comedy. We kept doing this on the set and I think, Kriti back then was shooting for Bachchhan Paandey. Also did the scenes the like how Amitabh Bachchan sir would in old days.”
Apart from Bhediya, Varun will also appear in the social drama Bawaal alongside Janhvi Kapoor. The actor will also appear in Ekkis and Sajid Nadiadwala's Sanki.