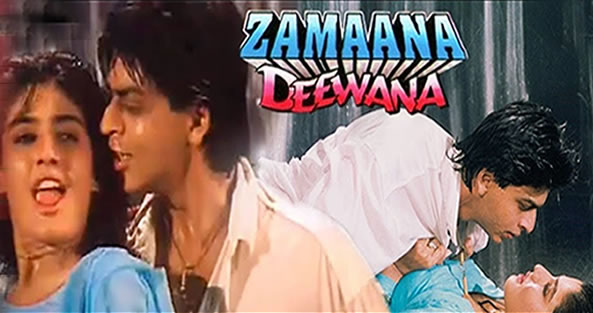 Zamaana Deewana is a 1995 Bollywood comedy film, produced by G. P. Sippy under the Sippy Films banner and directed by Ramesh Sippy. It stars Shahrukh Khan and Raveena Tandon in the pivotal roles along with Jeetendra and Shatrughan Sinha.

Plot: Suraj (Shatrughan Sinha) and Lala (Jeetendra) were good friends before falling prey to the vicious tricks of Sundar (Tinnu Anand), so much so that Lala believes his wife is dead and Suraj is to blame for that. They become the greatest of enemies and create chaos in the city by way of gang wars. Asst. Commissioner of Police (Prem Chopra) has 2 criminal psychologists, KD (Anupam Kher) and Shalini (Kiran Juneja) weave a plot to bring Rahul (Shahrukh Khan), the lively and spirited son of Suraj, close to Priya (Raveena Tandon), the ever-so-graceful and elegant daughter of Lala, hoping to bring the two sides together.

An alcoholic professor is sent to a juvenile school, where he clashes with a gangster,.. more...
Home / Movies /Zamaana Deewana