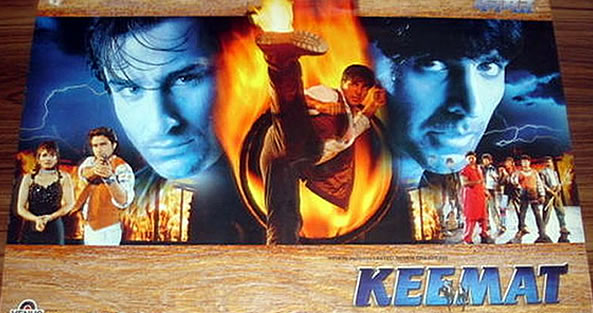 Petty thieves and con-men, Ajay (Saif Ali Khan) and Dev (Akshay Kumar), accidentally kill a young man named Mohan Tripathi (Ravi Kishen). This weighs heavily on their minds, so they find out the address of the deceased and travel to his village. They meet his dad, his mom, a sister, and Mohan's wife, but are unable to tell them the sad news. So they lie and tell the that Mohan is alive, and they are his friends. The two decide to stick around longer so that they can assist the.

They come to know that this village is being terrorized by Bhanu Pratap Singhania (Dalip Tahil) and his men, who wants this land at any cost, so he can start building on it. They oppose Bhanu and his men, and for a while there is a status quo. Then Bhanu finds out that Ajay has vices — drinking and gambling — and he decides to exploit this to separate the two friends, create bitterness and anger between them, and take advantage of the situation. Ajay succumbs to his temptation to gamble and starts losing money. Shortly thereafter he has lost all his money. Humiliated, he steals some gold bangles belonging to the and sells them, so he can continue playing. Dev finds out about this theft, and thus begins the rift between the two friends that Bhanu has been waiting for.

An alcoholic professor is sent to a juvenile school, where he clashes with a gangster,.. more...
Home / Movies /Keemat