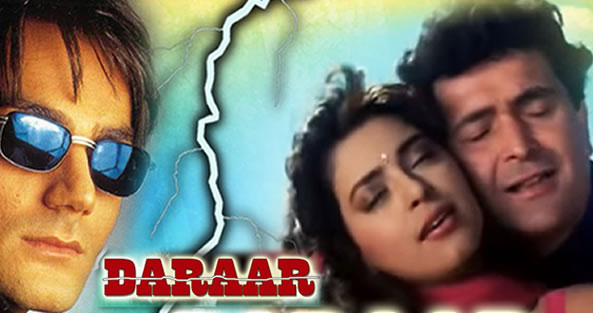 Vikram (Arbaaz Khan) is an overreactive husband. He can't control his anger and rage and he continuously beats his new wife, Priya (Juhi Chawla). One day Vikram and Priya go to celebrate her birthday on a boat. But the boat gets stuck in a storm and Priya escapes during the mayhem. Vikram thinks that she drowned. Instead, she runs away to Shimla.
There she meets Raj Malhotra(Rishi Kapoor). He falls in love with her, but she always is getting farther away from him. Later when she gets sick of him following her, she asks her mother what she should do. Her mother asks her to reveal to him the truth about her marriage. Then it will be his choice to accept her or not. Priya writes him a letter tabout her past life. She asks Hari (Johnny Lever) to give it to Raj. Hari misplaces the letter and gets someone to write a new one. Raj gets this other letter which contains nothing but a poem. When he finds out she is married, he leaves her. After Hari finds the original letter, he gives it to Raj. Raj falls in love with Priya again and decides to marry her.
One day Vikram sees Priya's picture in the newspaper and finds out that she is alive. He cancels his ticket for Goa and goes to Shimla. In Shimla, he searches for her. On finding that she is getting married, he tries to kill Raj but fails. So he sends Raj to prison instead. Later he goes to Priya's house and kills her friend and attempts to kill Priya as well.
In the climax, Vikram gets into a fight with Raj while Raj was trying to save Priya from being killed by Vikram. Raj drowns Vikram in a bathtub full of water. While Vikram supposedly dies, Raj and Priya runs to a nearby rail station. Vikram attacks them again and pushes Raj.There, Vikram's feet gets stuck on a railway track as he was chasing Priya. Seeing this, Priya tries to save Vikram as a train is approaching them fast. She tells him to move and runs to save him. Seeing Priya's love for him despite his abusive behaviour, he pushes her away just before a train hits him saying that " she is free".

An alcoholic professor is sent to a juvenile school, where he clashes with a gangster,.. more...
Home / Movies /Daraar