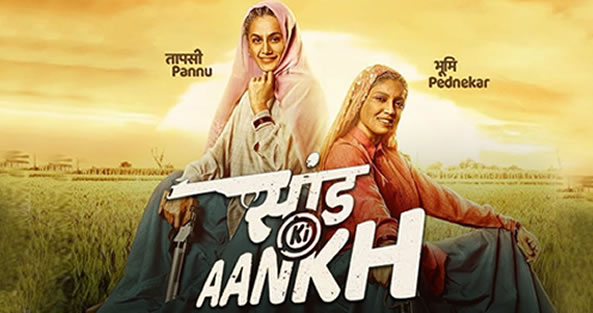 MOVIE RATING
Tushar Hiranandani’s Saand Ki Aankh is a women-centric film based on the lives of Indian women shooters Chandro Tomar and Prakashi Tomar. The inspiring life journey of Chandro Tomar and Prakashi Tomar was picturized by bringing actresses Bhumi Pednekar and Taapsee Pannu on board respectively.
About the story, it is all about Chandro Tomar (Bhumi Pednekar, Elder Co Sister) and Prakashi Tomar (Taapsee Pannu, Younger Co Sister) as the lead characters, who are co sisters of a Haryanvi Indian based family. At the age of 60, these two senior citizens, who live in Johri village (Uttar Pradesh), with their big family, accidentally discover that they have a flair for shooting. With some help from doctor-turned-shooting instructor Dr Yashpal (Viineet Singh), who sets up a shooting range in the village, they participate in various competitions and win medals. While they are busy honing their skills, the men in their house are unaware to the new happenings in the lives of these ladies. These brave and bold women had to face lot of odds and sexist remarks from the men of the society. After gaining some success in this sport, they inspire their granddaughters to take up this sport and build a well settled life out of it. The story spins around how the Shooter Dadis make the way through their household chores to the Sporting Event, the Dadis motivating their granddaughters to make their career out of it and the Dadis being an inspiration for the women of their entire village.
Bhumi Pednekar and Taapsee Pannu have done really a remarkable job by getting into the skin of the characters: be it having a command over the Haryanvi Accent, carrying the rural outfit with ease and stealing the show with dialogues bundled with the right kind of emotions. The two leading ladies carry the film on their shoulders effortlessly. Filmmaker Prakash Jha as antagonist, does a praiseworthy act.
The dialogues have been penned down really well as they are very entertaining, humorous as well as thought provoking at the same time. The movie's screenplay and direction could have been more crisp and short. The story's setup and societal background was already established in the first half in which the viewers have a very fair idea of the male dominated society they are living in and the kind of oppression they are facing every day. Too much of melodramatic encounters between the Granddaughters and Grandmothers could have also been avoided in the second half. A tighter edit would have made it a far more enthralling watch.
There have been minimal background scores been used in the movie, the ones which were used were as per the movie's story requirement. The music tracks as 'Womaniya' and 'Udta Teetar' have an entertainment quotient and they are very peppy.
Film’s climax is quite predictable. But the way, the director has woven the whole journey of the Tomar Sisters triumphs and defeats of life is admirable.
Overall, it is praiseworthy to watch once for its inspiring quotient with notable performances of main protagonists.