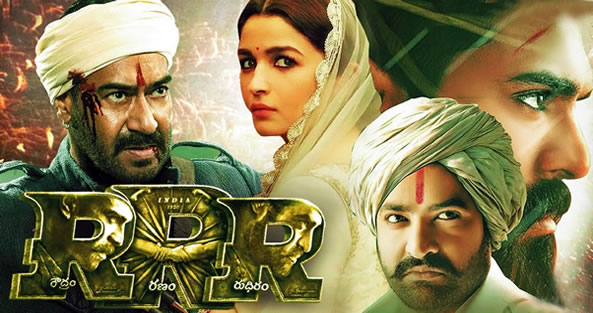 MOVIE RATING
After giving hit epics like Magadheera, Eega, Bahubali: The Beginning, Bahubali: The Conclusion among others, filmmaker SS Rajamouli returns with another mega budget movie, RRR with lead stars Jr. NTR, Ram Charan, Alia Bhatt and Ajay Devgn. The movie is set in the pre-Independence era, with core conflicts created by the demons in the British Empire. The filmmaker takes his thread from two real life characters, Alluri Sitarama Raju (Ram Charan) and Komaram Bheem (Jr. NTR) and weaves a fiction tale around the lives of these two freedom fighters. Pulling off a multi-starrer with Jr NTR and Ram Charan in the lead roles might seem an achievement in itself. But Rajamouli manages to deliver even when it comes to the story.
About the story, Charan and N.T.R Jr. play Alluri Sitarama Raju (or simply Ram in the film) and Komaram Bheem, a pair of freedom fighters who, as far as anyone knows, never actually met. Ramaraju and Bheem become close friends when they cross paths in Delhi. What happens when they come to know each other’s true intentions? The movie is set in the 1920s when British rule was at its peak in India. A small girl from a tribal village in Telangana is taken away as a slave by the British officers. In comes the mighty Bheem (NTR) who belongs to the same tribe and takes on the responsibility of bringing the girl back. But he has to go through a mighty British cop Ram (Ram Charan) who is on his individual goal against the British. Finally, both mighty freedom fighters come together to full fill their individual goal to defeat mighty British officers and their army.
About the performances, south superstars Jr. NTR and Ram Charan carry the film on their shoulders and justify Rajamouli’s vision of presenting them as Water and Fire. Jr NTR roars like a young tiger, while Ram Charan carries his character with greatest ease and grace, bringing in the aspect of the calm before the storm in his eyes. The two heroes complement each other rather than competing and get their moment of glory in the narrative. Ajay Devgn has a key role in the narrative forming the heart of RRR and he justifies his small but significant role with his capable act. Alia Bhatt too has a short appearance in the movie as Ram Charan’s love interest, Sita and she has a limited screen time. The rest of the star cast do justice to their respective parts.
Filmmaker SS Rajamouli creates again big canvas drama with all the eye-catching high-octane action around a routine tale of friendship. And it’s his ability to think big that takes the world of RRR to the next level in spite of some limitations at the script level in terms of a simplistic core conflict. On the other side, RRR has the best action sequences to offer in an Indian film with an unbelievable interval block and a roaring finale. It’s really one of the India’s biggest action dramas on the silver screen.
Production values by DVV Danayya are excellent. Music by Keeravani is tuneful. The camerawork by Senthil Kumar is top notch as the bygone era is showcased in a remarkable manner.
Rajamouli has made sure that RRR is bigger and grand in every aspect. RRR is jam-packed with several goosebump filled moments. He builds up the characters in such a way that you get connected to their stories right away and get indulged into the story telling. After some time, it is only characters that talk. After Bahubali film series, RRR is another successful action-packed saga from Filmmaker SS Rajamouli.
Overall, film RRR is worthy to watch for the noticeable performances of star cast and high-octane action sequences!