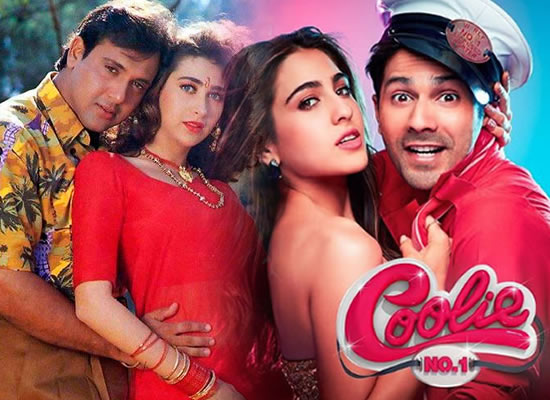 Presently, Sara Ali Khan is just two movies old in the industry, but she has managed to win hearts by her acting talents, of not just admirers but filmmakers and signed movies with renowned filmmakers.
Post Aaj Kal, Sara dived straight onto the sets of David Dhawan’s Coolie No.1 opposite Varun Dhawan, and after finishing the first schedule of the movie, presently, Sara and Varun are practicing for their song for the movie which is a remake of Karisma Kapoor and Govinda’s hit track- Main Toh Raste Se Jaa Raha Tha. During a media chat, when Sara was questioned about stepping into Karisma’s shoes, she told that although she is thrilled about reprising the role of Karisma Kapoor in the remake version of Coolie No 1 but she is well aware of the pressure. “It is going to be difficult because the film, the songs and everything related to that film is iconic. So it is going to be very difficult. But if we take pressure, then we will definitely mess up. What makes Govinda ji and Karisma ji so iconic was an element of spontaneity and ‘bindasspan’ with every take, every shot. They had so much fun while shooting and that translates on screen. These are big shoes to fill,” revealed Sara Ali Khan.
Speaking about the song, Sara told that she is going to shoot a song for this movie, and Sara confesses that although she is not a superb dancer, but if she thinks about the nervousness and not the excitement and privilege then she will definitely disappoint everybody. “I am not taking too much stress about this at the moment,” told Sara.