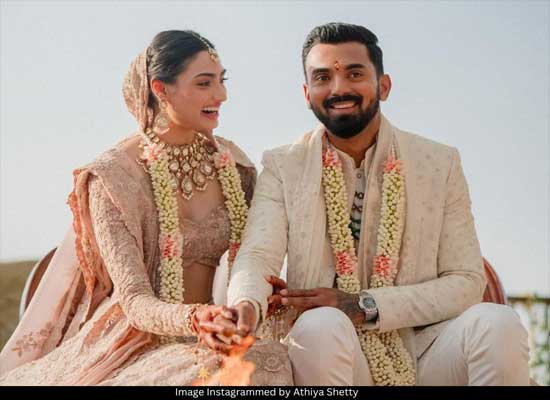 It’s official! Bollywood actress Athiya Shetty and cricketer KL Rahul, after dating for years, have tied the knot in an intimate wedding ceremony on Monday, 23rd January 2023. The celebrity couple exchanged wedding vows on Monday at Athiya’s father and actor Suniel Shetty’s Khandala farmhouse. The new bride in town took to Instagram to share the first photos from the wedding ceremony. And we are smitten with the dreamy pictures! Along with the delightful shots, Athiya also penned a heartwarming caption marking the special occasion.
“In your light, I learn how to love…Today, with our most loved ones, we got married in the home that’s given us immense joy and serenity. With a heart full of gratitude and love, we seek your blessings on this journey of togetherness,” the caption read.
The first photo features the couple sharing a beautiful moment as they flash their million-dollar smiles while sitting on the mandap. The second shot captures the much-in-love couple taking pheras around the holy fire.
The third one is a close-up shot of the two from their pheras. While the last two pictures show the couple embracing each other while celebrating their union.
For their big day, the couple looked all things dreamy in their wedding pictures as they opted for pastel outfits.
The Bollywood beauty looked endearing in a peach-hued chikankari lehenga by renowned designer Anamika Khanna. The traditional ensemble featured thread and pearl work. Her look was accentuated with a polki and pearl neckpiece, matching earrings and maang teeka.
Athiya opted for a pink dewy makeup look for her special day. The cricketer complimented her look with an ivory-coloured sherwani by the same designer. He accessorised his look with an emerald necklace.
After the ceremony, the bride’s father Suniel Shetty and her brother Ahan Shetty met the paparazzi and greeted them. The father-son duo was also seen giving away hampers to the press following the wedding ceremony.
While talking to the paps, Suniel revealed that the wedding is officially over and he has become a father-in-law.
"It was a beautiful function and a close one. The wedding is officially done and I have become the father-in-law now,” he said.
Click here for full story…