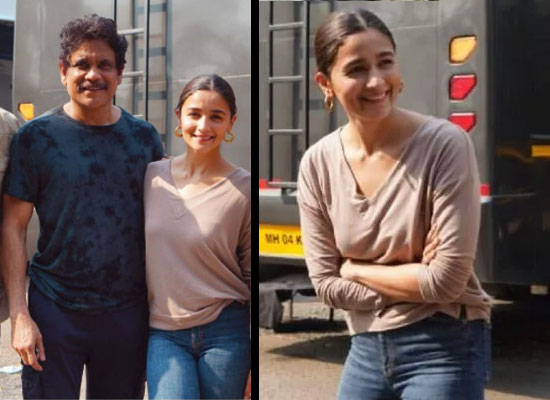 As we all know that Alia Bhatt, Ranbir Kapoor and Nagarjuna Akkineni starrer Brahmastra's schedule of shooting is almost nearing its end. Recently, Nagarjuna accomplished his portions of the film and he penned a note as his shoot journey with Alia and Ranbir came to an end.
Now, The Sadak 2 star Alia has also expressed her gratitude to Nagarjuna in a note as he bid adieu to her and Ranbir to complete the remaining portions of the shoot. On her Instagram handle, Alia posted pics from the sets with Nagarjuna, Ranbir and Ayan as they all posed together. In her note, Alia wrote, "& that's a wrap for Nagarjuna Sir on BRAHMASTRA! Thank you for the memories sir.. such an honour to work with you. With the end of shoot so near.. can’t help but look back on what a journey it has been so far on the film.. & the excitement of what lies ahead is another journey ALL TOGETHER."