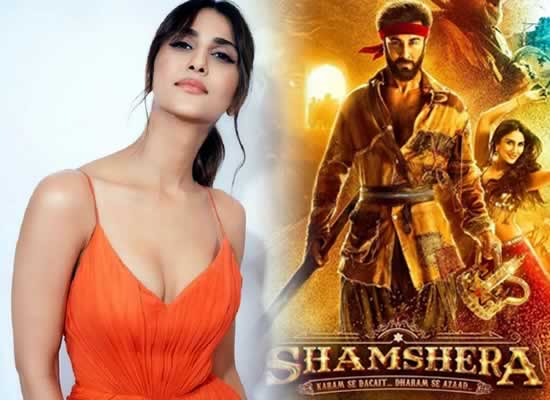 Beautiful actress Vaani Kapoor is readying for the release of her forthcoming movie 'Shamshera' featuring Ranbir Kapoor and Sanjay Dutt in lead roles. The movie marks first union of Ranbir and Vaani for a film. The actress essays the love interest of Ranbir’s character Sona who is a dancer.
Explaining her character in the movie, Vaani told she essays the character of Sona, the most sought-after travelling performer of India in the 1800s. She further added, “I have always chosen roles where my character pivots the script in a certain direction and in Shamshera too, Sona plays an important role in building the narrative,” Vaani revealed to an online portal.
The actress also thanked director Karan Malhotra for seeing her in the role of Sona. She told Karan held her hand at every step of the way and guided her to bring Sona to life. The Chandigarh Kare Aashiqui actress further revealed, “Sona has a strong will power, she’s confident, a go getter yet has her own emotional vulnerabilities. She’s definitely one of the most refreshing characters I have played on screen.”
Speaking about co-star Ranbir Kapoor, the Befikre actress revealed, “I am teaming up with Ranbir Kapoor – a powerhouse of talent. He’s truly a very special actor and my personal favourite.”
Directed by Karan Malhotra, the movie is set to release in Hindi, Tamil, and Telugu on July 22, 2022. Shamshera marks Ranbir’s return to the cinemas after 4 years after the release of his 2018 film, Sanju.