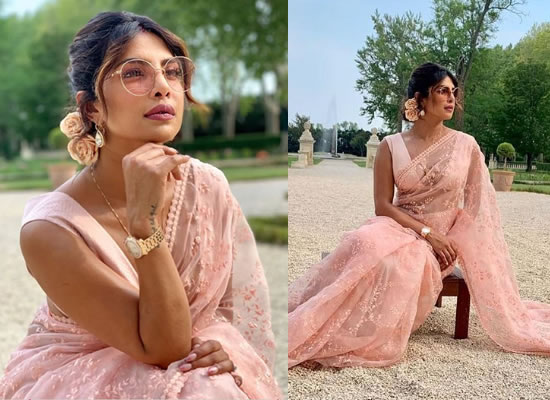 The gorgeous star Priyanka Chopra Jonas was crowned the Miss World back in 2000 and post that stepped into Bollywood with her first movie, Hero: Love Story of a Spy. There was no turning back for the desi girl and she went ahead and did tons of hit movies including Dostana, Bajirao Mastani, Mary Kom and more.
But, success didn’t come easy for the beautiful star and she also had to struggle in the initial days of her career. In a latest media chat with a tabloid, Priyanka opened up about the same and stated that in the beginning, there were many times when she was thrown in and out of movies. Priyanka even disclosed that she was yelled at by her directors. But, she recalled her dad Late Dr Ashok Chopra’s teaching and kept on going. Priyanka disclosed that she worked on her confidence and managed to make a mark for herself.
Priyanka revealed, “I didn’t know anything or anyone. I was yelled at by directors, I was thrown into movies, I was thrown out of movies.” Remembering her father’s saying, Priyanka further added, “The more you talk, the less you will listen and the less you will learn’...I taught myself confidence. I learnt it’s what you do after failure that makes you a success.”
In the meantime, Priyanka is gearing up for the release of her Bollywood film, The Sky Is Pink.