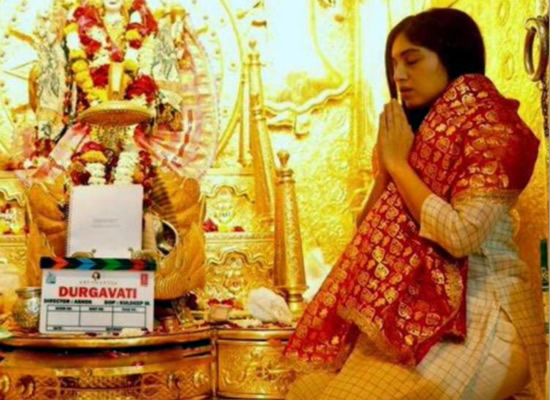 After Pati Patni Aur Who's success, Bhumi Pednekar is all set to step her foot in the horror genre in 2020 with Durgavati and Bhoot- Part One: The Haunted Ship. Earlier in December 2019, Bhumi had pronounced that she will star as the ‘Hero’ in a movie named Durgavati and Akshay Kumar will be the presenter of the movie.
Now, announcing about the movie, Akshay posted, “EXCITED to announce @bhumipednekar in & as #DURGAVATI. A scary-thriller, going on floor mid-January. Presented by #CapeOfGoodFilms and @itsBhushanKumar , produced by @vikramix and directed by Ashok. Need your love and luck @TSeries @Abundantia_Ent.”
As per reports, the makers have begun the shooting of Durgavati. Akshay took to Twitter and shared this news with his fans. In the photo, we can see Bhumi seeking blessings of Goddess Durga before beginning the shoot.  We can also see the clap and the script of the movie placed on Maa Durga's feet. Sharing the photograph, Akshay wrote, "#Durgavati begins, with blessings and good vibes, as always need your best wishes as well."
Film Durgavat is presented by Akshay Kumar and is written and directed by G Ashok. It is a remake of the Telugu movie Bhaagamathie, starring Anushka Shetty.