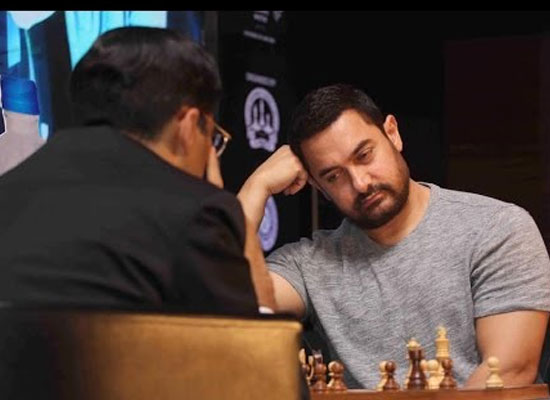 Aamir Khan is one of the stars in the Hindi film industry who is known for portraying any character with perfection. The megastar of Bollywood is friends with the Chess World Champion Viswanathan Anand and they often play a game together.
Recently, numerous celebrities including Aamir Khan, Arijit Singh and Viswanathan Anand came together to essay a few games of chess and have a fun talk. During the game, the host, Samay Raina, asked Aamir a question, “If there’s an amazing biopic on Viswanathan Anand in the pipeline, would you be interested to take the lead role?” Aamir smiled and responded, “Is that a question? That's one of the easiest questions to answer.” Actor further revealed, “It would not only be an honour and pleasure to play Vishy, but it’ll also be highly exciting to get into his mind. When I play a character, I try to understand the person’s mind. And Vishy being a real person, I’ll obviously spend a lot of time with him to understand his mind and how his mind works. I would also speak to his wife and his family to further understand how his mind works. And then hopefully, I’ll surprise Vishy when I play him on screen. So I’d look forward to that if and when that happens”.
Mesmerized by Aamir’s answer, Viswanathan Anand replied, “And I promise I won’t put you in a situation where you have to gain weight for the role”. His answer left everyone in splits.