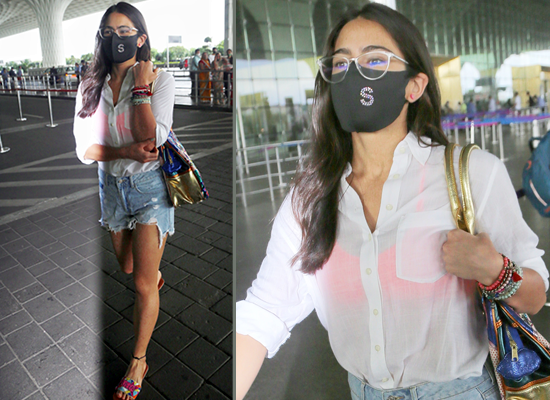 Sara Ali Khan is one of the most stylish actresses of Bollywood. The actress often astonishes her admirers by posting amazing pics from her exotic vacations. Now the Kedarnath star seems to be flying to an undisclosed location again. Well, this time Sara’s airport look was all about colours, quirkiness and lively style.
Recently, Sara Ali Khan was spotted at the airport leaving for an undisclosed location. She wore a ripped blue denim short paired with a white sheer shirt as her fluorescent orange bralette glowed. Sara left her hair open, wore her spectacles and sported a no-makeup look. She wore a bunch of bracelets that added to her funky look. She wore a black mask with her name initial ‘S’ written on it to cover her face. She wore funky colourful slip-ons with ‘queen’ written on it.
On the film front, Sara will be seen in Atrangi Re with Akshay Kumar and Dhanush. The movie is directed by Aanand L Rai and produced by Bhushan Kumar.