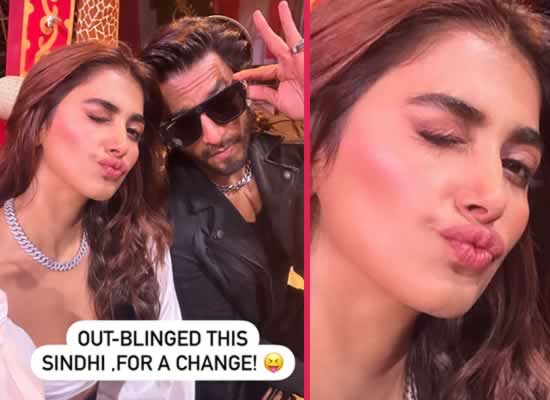 Bollywood's new Jodi Pooja Hegde and Ranveer Singh are all set to unite for the first time in Rohit Shetty's directorial Cirkus. It also stars Jacqueline Fernandez and Varun Sharma in the lead role along with Siddhartha Jadhav, Johnny Lever, Sanjay Mishra, Vrajesh Hirjee, and others. Cirkus is slated for worldwide theatrical release on 23 December 2022. The movie is loosely based on the 1982 Hindi film Angoor and is also a Hindi adaptation of Shakespeare's The Comedy Of Errors.
Recently, the star casts of Cirkus such as Ranveer Singh, Varun Sharma, and others arrived on the sets of Khatron Ke Khiladi for the Grand Finale episode. The reality show is hosted by Rohit Shetty. A few hours back, Pooja took to her Instagram story and shared a selfie with Ranveer. She captioned the pic: "Out-Blinged this Sindhi, for a change!" In the pic, Pooja wore a white puffy sleeves crop top featuring a bralette-style bodice. Ranveer, on the other hand, sported a black t-shirt and a black leather jacket.