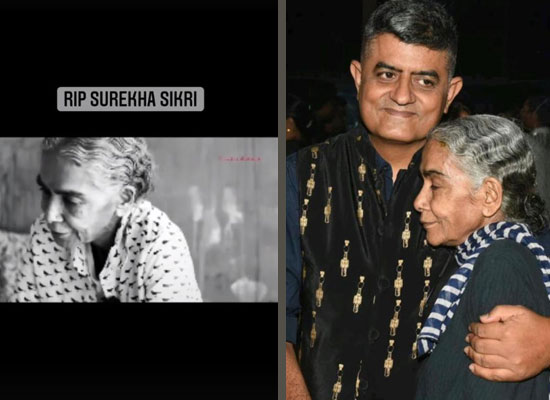 Balika Vadhu's well-known actress Surekha Sikri passed away at the age of 75 on Friday morning. The Tamas star had been unwell for several months which included a brain stroke that occurred last year. On July 16, the veteran actor breathed her last and finally succumbed due to cardiac arrest. After the news of her demise, celebs from both Bollywood and TV industries mourned the loss of the amazing actor with heartfelt tributes. Amid this, actors Ayushmann Khurrana and Gajraj Rao, who shared the screen space with Surekha Sikri in Badhaai Ho, took to social media to pay their condolences.
Ayushmann Khurrana shared a throwback video of Surekha Sikri along with the caption ‘RIP Surekha Sikri’. On the other side, Garjraj Rao wrote a lengthy message to express his sorrow. The actor shared, “Making a film is like travelling in a train, where the journey is a destination in itself. You meet all kinds of co-passengers here. Some open up their tiffins and hearts to you, while some guard their luggage and eye you with suspicion. Badhaai Ho will always be that special train journey which brought me to a new station in life, and I'm truly thankful that we had someone like Surekha ji as the emotional anchor of this ship”.
He further added, “She was definitely the youngest at heart on the sets, and had no airs about her stature or endless experience as an actress. Her craft was defined by her years of homework and 'riyaaz' as an actress, combined with a child-like enthusiasm. As all journeys must end eventually, we bid goodbye to Surekha ji today. Thank you, Surekha ji, for all the wisdom and memories you have left us with”.
About Surekha Sikri’s filmy career, she was famous for her portrayal of the orthodox dadi in the TV show Balika Vadhu. In the film industry, she featured playing significant roles in critically acclaimed movies such as Zubeidaa, Mr. and Mrs. Iyer, Badhaai Ho, Raincoat and more.