Alia Bhatt opens up on being a creative producer for Darlings! Thu July 28th, 2022 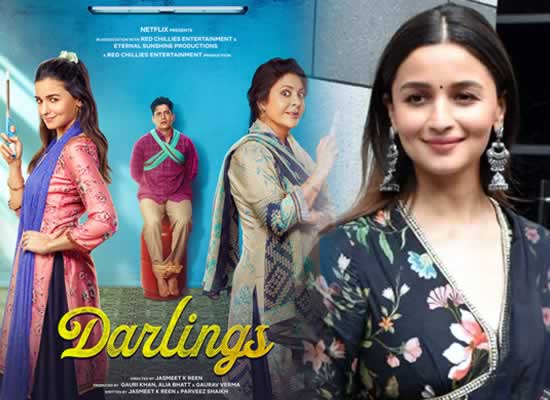 Bollywood actress Alia Bhatt is going to make her debut as a producer with her forthcoming film Darlings. This film will be co-produced by Shah Rukh Khan. Darlings will also see Shefali Shah, Vijay Varma and Roshan Matthew in key roles.
Recently on the trailer launch event, Alia was questioned a lot of questions about being a producer and now in a latest media chat with a daily, the actress has opened up about box office numbers and how she follows her creative instinct.
Speaking about the box office numbers, the Student of the Year actress revealed that she doesn’t understand numbers. She has always marched her own beat and now after turning into a producer, she is relying on what has guided her so far, her creative instinct. She revealed, “Numbers don’t make any sense to me. I have a business [bent of] mind, but if you talk numbers, I [drift] out of the conversation. When it comes to being a producer, I will always be a creative producer. I respond instinctively.”
Darlings is a dark comedy and it revolves around a wife who abducts her own husband to avenge the years of mistreatment she suffered at his hands. Her mother helps the girl in this task. Shefali Shah plays Alia Bhatt’s mother in the movie and it is evident from the trailer that they do share a great friendship on screen.