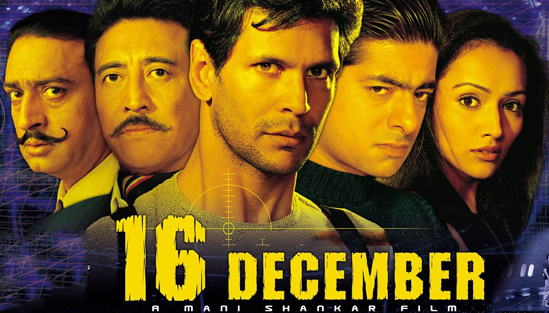 16 December, 1971 was the day when India won the war against Pakistan, and was also able to liberate Bangla Desh from Pakistan's rule. Although the ruling dictator of Pakistan surrendered unconditionally to India, some of the hard-lined Pakistani soldiers were bitter and angry at the surrender, as they wanted to continue fighting the Indians until their last breath. They retreated in silent and later came together to form their own groups of Jihaadi soldiers to carry out terrorists attacks against neighboring India. One of them was Dost Khan (Gulshan Grover). Although the Indian authorities were aware of Dost Khan's terrorist activities, they were unable to apprehend him as he kept changing disguises, and always kept one step ahead of the authorities. This matter was assigned to Chief of Revenue Intelligence Vir Vijay singh (Danny Denzongpa) and his team of Vikram (Milind Soman), Victor (Sushant Singh), and Sheeba (Dipanita Sharma). Their investigation led them to the conclusion that .

Krishna Dev aka KD, a laid back cop, works in AP HIT, has to take up a gruesome murder.. more...
Home / Movies /16 December